Amsterdam is called by many people as the Venice of the North and they really aren’t wrong. 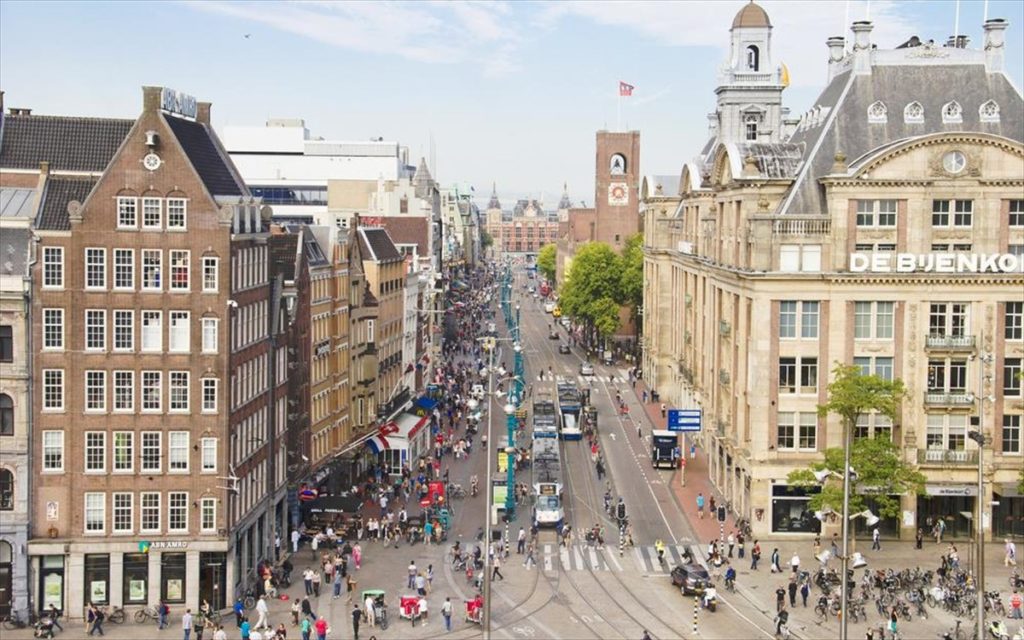 You’re sure to love the houses that look like something out of a fairy tale with their triangular roofs and if you go (not too) far out, you’ll love the flower-filled courtyards of houses with all kinds of flowers.

I’ve said it before that Amsterdam brings our childhood fairy tales to life. The ones with houses made of marshmallows and walks through lush green meadows. And it’s very easy to get around and see the sights.

FROM THE AIRPORT TO THE CENTRE

There are three ways to get to and from the airport, by train, bus and amsterdam airport taxi.

The easiest way is by train. In the Netherlands, trains are fast, clean and, most importantly, “on time”.

The signs at the airport will direct you directly down to the arrivals hall where from platforms 1 and 2 you will take the train which will drop you off at Amsterdam Central Station. The journey takes about 20 minutes and the cost is 5.40 euros.

You’ll take it right outside the main arrivals building at the airport. The ticket, essentially a card, costs 5 euros and you will get it from the special machines at the amsterdam airport. In addition you can put in a larger amount so that you can also get one for your trips around town.

The journey, depending on the traffic on the roads, takes about 35 minutes.

Alternatively, you can get a card online that will cover your days for all transportation. To order it see here.

If you are a family or group of at least four people a taxi will make it easier to get to the hotel. Just make sure it has the bright “TAKE” sign on the roof and the official blue license plates.

The ride from the airport to the centre costs around 39 euros.

Greenery, cycling, fun, coffee shops… Amsterdam is a popular European destination that attracts younger and older people alike and has a lot to offer active travellers, especially those who are… and especially beginners.

Canals from the Golden Age of Holland, romantic candlelit cafes, bicycles in the streets, beautiful parks, grand museums, colourful markets, vibrant nightlife and much more awaits the tourist on a trip to Amsterdam. But as long as you know where to go and what to see, you can get as much as you can from such a trip, which will certainly not be your first and last in the capital of the Netherlands.

Museums
Amsterdam is the city with the most museums in the world, having more than 60. Be sure to pass by the Museumplein, a large expanse of grass, underground parking and supermarkets, where you will find 3 museums, the Rijksmuseum (National Museum for the Arts and History of the City), the Van Gogh Museum dedicated to the work of the famous painter and the Stedelijk Museum of Modern Art. In the Nieuwmarkt you can visit Museum Het Rembrandthuis to admire the impressive collection of works by Rembrandt, who from 1639 to 1658 lived and worked in the house that now houses the museum, while other museums of interest include the Anna Frank Museum, the Jewish Historical Museum and the Verzetsmuseum Resistance Museum in the Plantage district. Fans of… tulips will learn all about them at the Tulip Museum, while the more… kinky Sexmuseum and Erotic Museum are usually not missing from the city’s tourist list.

Palaces
If you want to get a taste of opulence and luxury, at Dam Square in the centre of Amsterdam (which is also the most central square in the city) you can visit the Koninklijk Paleis (Royal Palace), which is the official residence of King Willem-Alexander and his family, where regular tours are held. In fact, April 27 is also King’s Day and if you are in town during this period, you will witness a huge street party.

Churches
Three of Amsterdam’s most beautiful churches that you should definitely experience are the 17th century Protestant Zuiderkerk (South Church) in the Nieuwmarkt district, the Oude Kerk (Old Church) which is not only the oldest church but also the oldest building in Amsterdam dating back to 1213 and the Westerkerk (West Church) with its panoramic views.

Parks
The large public park Vondelpark in the Amsterdam-Zuid district is the locals’ favourite getaway and the favourite walk for tourists, reaching 10 million visitors a year. The park features an open-air theatre, playground and various food and drink facilities, while its English-style gardens, lakes, bridges, paths and sculptures will make you feel strongly that you are in the midst of a travel adventure. Other notable parks include Sarphatipark and Westerpark, while the Hortus Botanicus Botanical Garden, which is one of the oldest in the world, will also fascinate you.

Where to eat
Try traditional Dutch dishes at Bistro Bij Ons and La Falote, the best croquettes in town at Van Dobben or modern delicacies at Greetje and Hemelse Modder. Don’t leave without trying rijsttafel (lots of small dishes that can be as many as … 40, accompanied by rice cooked in various ways) at Tempo Doeloe.

Where to drink
Discover how the famous Heineken is brewed at the Heineken Experience brewery, where admission guarantees plenty of beer, and try Dutch gin Jenever at the Wynand Fockink bar. Lively nightlife and plenty of parties can be found on the Rembrandtplein, Leidseplein, the medieval centre and the Red Light District, with a plethora of pubs and clubs, while if it’s legendary coffee shops you’re after, you’ll find them scattered around the city, with Dampkring and Abraxas among the popular ones.